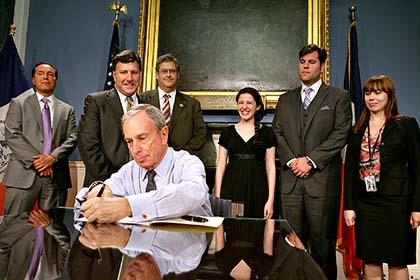 Student proposals can make a difference!  Listed below are a few examples of Quality of Life INNOVATIONS proposals that have been implemented and have improved the community.

Cyberbullying – A student’s project inspired the passage of a bill requiring the Commission on Human Rights to work with Federal, State and City agencies to develop a training course for city employees on bias related harassment (i.e., verbal threats, taunting, intimidation, abuse and cyberbullying). She found that many victims of bullying/cyberbullying were targeted because of general physical appearance. Her proposal helped to influence a bill by Councilman Mark Weprin from District 23 in Queens to address bullying/cyberbullying education in New York City. The bill was signed into law by Mayor Michael Bloomberg in 2011.

Ladies of Substance: Building the Confidence of Future Women – To promote self-confidence, an after-school club was started in 2015 as a safe-haven for girls to express themselves openly and where they will not be judged based on their appearance. The club promotes the belief that one of the best ways to feel better about oneself is through charity work. The members organize fundraisers for various causes and conduct group discussions to encourage positive thinking and increased self-esteem.

Mozart for the Mind – The rhythm of classical music is known to support feelings of happiness which is conducive to academic achievement and success. This 2013 QLI team worked with their school to create a productive atmosphere for students by playing classical music intermittently in the hallways and through the use of software that allows students to set up time schedules to play pre-recorded music pieces by students.

Teaching CPR and AED to High School Students – The death of a teacher during school hours who might of survived if defibrillation and CPR were administered to him early inspired this student to propose a program. His program focused on CPR training of high school students to be prepared for life threatening emergencies. Councilmember Andrew Lanza awarded a $5,000 grant to support this program’s implementation. As a result, 600 students were trained in these life-saving skills in fall 2005.

Solving the Energy Crisis One Step at a Time – In 2014, a student created a sustainability product that harnesses energy from the impact of footsteps. Recognizing that the demand for global energy is rising, this student wants to use high traffic locations like Times Square or a mall to generate and conserve greater levels of energy. He is continuing to develop this product in his own start-up company, which in 2016 was named one of the top 25 tech companies in Texas and New York by Techweek.

Heat It Up: Joining the Fight Against Plastic Bag Pollution with Solar – In 2016, to combat the use of plastics, this QLI student researched and designed a solar oven called a “Sun Fuser” that converts disposable plastic bags into more durable and sustainable reusable bags.

Reducing Human Exposure to PM2.5 – In 2016, an air filter was produced that has a competitive advantage over other filters to reduce the impact of PM2.5, which is considered extremely dangerous as it can travel deep into the lungs and cause cancer. These students also created a website to educate visitors about the dangers of PM2.5 levels in their community.

Using Solar Energy – The New York State Department of Transportation piloted a $200,000 solar lights program on a stretch of highway in Rochester after hearing an original proposal presented by a QLI student in 2003. This student has committed her life to public service as the youngest elected New York State Assemblywoman.

Isolation Among Nursing Home Residents – After researching the benefits of social interactions on senior citizens’ physical health in 2014, two students organized a club at their school called Students for Seniors. Members regularly visit nursing homes and senior citizens have the opportunity to form meaningful relationships with the students. The club also implemented a program of music and pet therapy and created a technology center at the nursing home.

Teaching Seniors to Use the Internet – A nationally recognized high school community service program was developed in low-income centers to teach seniors, the majority of whom were Holocaust survivors, how to use email and the internet. He identified the pilot senior citizen center, secured donated computers, developed a curriculum, taught the program and recruited other students from his school to continue the program after he graduated. This QLI student (the only young person represented) presented a replication plan to the Housing and Urban Development’s Best Practices Conference in Washington, D.C., in 2000.

Providing SAT Preparatory Classes – In 1999, a group of students recognized the inherent inequities for economically disadvantaged students in having access to private SAT prep. As a result of their proposal, they secured nearly $10 million dollars over 10 years from the Peter Jay Sharp Foundation to fund the cost of SAT classes for low-income students in 20 New York City high schools. This program administered by Jinx Perullo, former Principal of Stuyvesant High School, served 20,000 students a year.

Encouraging Young Women to Pursue Careers in Mathematics – A pilot program was offered in 2005 to encourage 200 middle school girls to envision themselves in careers that use mathematics as well as dispel gender-based math myths. This student created a unique curriculum that motivated young women to do well in mathematics. This innovative “curriculum in a box” has been distributed to numerous teachers at conferences throughout the country.

Noise-Induced Hearing Loss Awareness – A 2017 awareness campaign about the dangers of noise-induced hearing loss (NIHL) was conducted in a school with the use of posters, presentations, hallway announcements, factsheets and bookmarks. The school recognized the potential to help decrease NIHL and is creating an Annual Hearing Awareness Day to coincide with World Hearing Day and incorporating a NIHL lesson into health classes.

The Relationship between FitBit Usage and Awareness of Fitness Habits – In 2014, a group student proposal resulted in the purchasing of pedometers for all incoming high school freshmen. This school-wide fitness campaign encourages students to walk 10,000 steps a day.

Informing the Public About Prostate Cancer – To encourage males to go for a colonoscopy, this group of students created a massive awareness campaign and launched a website in 2002. The proposal was in response to their concern about the health of their fathers and grandfathers.

Helping Immigrant Workers Know Their Rights – In 2005, students produced and widely distributed a handbook, which detailed immigrant worker rights, provided resources, and contained personal narratives, photographs and editorial cartoons. They translated the handbook into Spanish, Chinese, and Hindi and are continuing to conduct workshops on this topic.