Please join us for an evening with entertainment and a look to the future!

Ryan Oakes
Ryan Oakes is one of the country’s most sought-after corporate entertainers. A decorated
veteran in the field of magic, Ryan has performed his unique brand of illusion all over the US.

Christiana Riley is a Member of the Management Board of Deutsche Bank AG and CEO of Deutsche Bank Americas. After joining the bank in 2006, she held a number of positions in the Group Strategy division and served as the Bank’s Head of Corporate Strategy from 2011 – 2015. In 2015, she became CFO of Deutsche Bank’s global Corporate & Investment Bank, DB’s largest operating division. From 2016-2019, Christiana served as Chairman of the Audit Committee of Deutsche Postbank AG, and following its merger, as Audit Committee Chair of the Supervisory Board of the Deutsche Privat und Firmenkunden AG. She also serves on the Board of Directors of the Deutsche Bank Americas Foundation as well as several external Boards, Foundations and Councils. Christiana graduated cum laude from Princeton University. Her MBA is from the London Business School. 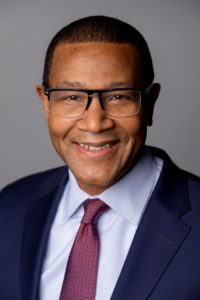 Bill Borden is the Corporate Vice President at Worldwide Financial Services, Microsoft. He is responsible for leading the development and execution of Microsoft’s global financial services strategy, supporting its FSI customers in their digital transformation journeys. As Microsoft’s thought leader in financial services, Bill came to the company with a distinguished, 20-plus year career in the industry holding various senior leadership positions at some of the largest banking institutions in the United States including Bank of America and Citigroup. He holds a Bachelor of Science degree in electrical engineering from Cornell University and a Master of Business Administration degree from Northwestern University – Kellogg School of Management. Bill is a member of The Executive Leadership Council, the preeminent membership organization for the development of global black leaders. He is committed to helping the communities in which he lives and works through board membership, volunteering and mentoring. He and his wife reside in New Jersey and are the proud parents of two children.

Charles Chaitman is a ballet dancer and composer of ballet music.  He is a student at the Jacqueline Kennedy Onassis School of American Ballet Theater.  He has had solo roles in several American Ballet Theater performances including Hop in The Sleeping Beauty and The Niccolo in Whipped Cream.  He wrote and played the music for the ballet movie The Waterbird.  He is honored to compose a new piece for piano and violin for the W!se Gala.

Ryan Oakes is a magician, mentalist, and sleight-of-hand artist. He creates intriguing illusions for discerning audiences, and his unique brand of mystery melds psychological persuasion and deft manipulation to create an interactive experience for his audiences. As a performer, he’s been profiled by Forbes, The Wall Street Journal, and The New York Times and has appeared on HARRY with Harry Connick Jr, The View, CNN, The Discovery Channel, The Disney Channel, and ESPN. Ryan also co-starred in The Real Hustle, a television series about con artists that aired on the truTV network. He is the spokesman and consultant for a line of children’s magic sets, which are distributed internationally under the Ideal toy brand. Ryan is a graduate of the University of Pennsylvania and resides in Brooklyn with his wife and two children. Visit him online at http://www.ryanoakes.com